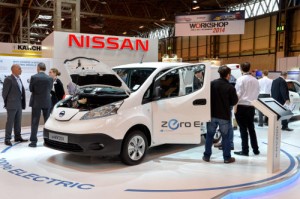 The cost of running almost half (48%) of the vans of the UK’s roads could be reduced if the vans’ owners were willing to switch to ultra-low emission electric and hybrid models, according to a new campaign backed by leading vehicle manufacturers*, the Office for Low Emission Vehicles and the SMMT.

Go Ultra Low has been setup to demonstrate the money-saving benefits of choosing low emission vehicles to the UK’s business owners. According to the group, UK commercial vehicle operators are currently missing out on up to £2.6bn per year in fuel savings alone.

The survey’s findings are an uncanny echo of a 2013 Nissan campaign, which also suggested that, er, 48% of operators could save by making the switch to electric. Nissan’s e-NV200 electric van is one of the most successful electric models to date and the firm is, of course, a member of the Go Ultra Low campaign. I do wonder just how new these calculations on potential savings are, however — not least because diesel prices are significantly lower than in 2013…

Anyway, according to Go Ultra Low, millions of operators running small and medium-sized vans as back-to-base or short-haul vehicles (a very common scenario with vans) could profit by switching to pure-electric vans (e.g. the Nissan e-NV200 and Renault Kangoo Van Z.E.) and plug-in hybrids (e.g. the Mitsubishi Outlander 4Work).

This is a song I’ve sung on these pages many times before, and I remain convinced that the numbers add up despite the fall in diesel prices we’ve seen over the last six months. If you’re still not convinced, it’s worth noting that the typical fuel saving from switching to an electric van is £1,459 per vehicle, per year, based on an annual average mileage of 20,000. That’s not small change and equates to nearly half the annual fuel bill for a van doing 20,000 per year, based on my calculations.

On top of this, ultra-low emission vehicles (ULEVs), with CO2 emissions of less than 75g/km, all exempt from road tax. and pay no congestion charges in London. There’s also a growing national network of free recharging points and a government grant of up to £8,000 towards the initial purchase price, which effectively makes electric vans as cheap to buy as diesel models.

If you’re still on the fence, visit www.goultralow.com for more information.

1 thought on “Van operators could save £2.6bn per year by switching to electric, says manufacturers”