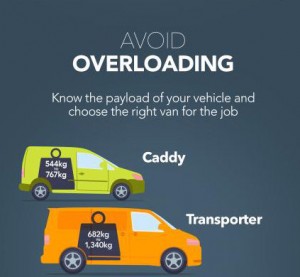 A new survey by Volkswagen Commercial Vehicles has found that 45% of drivers knowingly overload their vans and that 53% of drivers don’t even know their vans load-carrying capacity.

As a result, VW estimates that nearly 50%, or 1.2m, of the vans on British roads are overloaded.

According to the survey, nearly half of UK businesses don’t monitor the weights of their company vehicles. When driving a hire van the difficulties can be greater.

Even similar models can have signficantly different weight ratings, depending on how they’ve been specified by the hire company. Payloads for a Volkswagen Transporter, for example, can range from 682kg to 1,340kg, according to the firm!

Knowing how much your load weights isn’t always easy, either. While standardised items such as bags of cement are labelled with their weight, the contents of your home aren’t. If you’re moving house with a hired van, it’s potentially quite easy to overload the van, especially if you have lots of heavier items, such as boxes of books.

The Driver and Vehicle Standards Agency (DVSA) are quite good a spotting overloaded vans, too. The DVSA stopped over 10,800 vans last year, of which 89% were overloaded. If you get caught, you could face points on your licence, a fine or even a court summons, depending on how overloaded your van is.

What’s more, if you are involved in a collision when your van is overloaded, your insurance will be invalidated. Driving when overloaded increases braking distances and can unbalance the handling of your van, making it more likely to roll over and harder to steer.

How to avoid overloading

Before you hire a van, I’d suggest a look at the vanrental.co.uk van weight jargon buster.

Once you’ve punched through the confusing jargon relating to this subject, then a bit of common sense is required. Assuming you are not able to know the weight of everything in your van, here are some tips: