This week saw TNT announce an order for 100 Smith Electric Vehicles Newton delivery trucks. The vehicles will be put 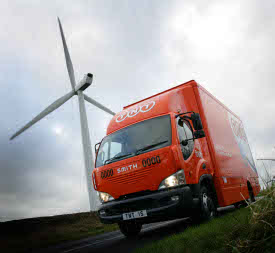 into use on urban routes and the vehicles will have a gross weight of 7.5 tonnes – territory currently occupied by diesel-powered vehicles.

The electric vehicles are part of TNT’s ‘Planet Me’ green initiative and offer a number of environmental and economic benefits – including zero road tax and  London Congestion Charge exemption. TNT believes that when all 100 are in operation, they will reduce the company’s CO2 emissions by 1,300 tonnes annually.

The Newtons should also prove cheaper to fuel than their diesel equivalents – and given that TNT’s fleet of 1,950 commercial vehicles and 930 cars slurped a massive £24.83m worth of diesel last year, I guess every little helps!

The vehicles are the first ever 7.5t class lorries that can offer comparable performance to diesel equivalents an maintain zero emissions. The trucks cost just 7p/mile in electricity costs and have a range of 70 miles and a maximum speed of 50mph – ideal for urban delivery work.

According to Tom Bell, Managing Director of TNT Express Services UK & Ireland, the economic argument is as compelling as the environmental case: “On average it costs just £40-a-week to power a zero emission vehicle as opposed to around £200 spent on diesel fuel. The electric vehicles are also exempt from the London congestion charge – approximately £1,750 a year – and do not incur road tax in the UK.”